Veteran Bollywood star Neetu Kapoor, on Monday, shared a picture from the sets of her next film ‘Letters to Mr Khanna’.

Taking to Instagram, Neetu shared a picture on her stories which she captioned, “Craziness in Bundi with @dhaimademilind and @sunsunnykhez.” 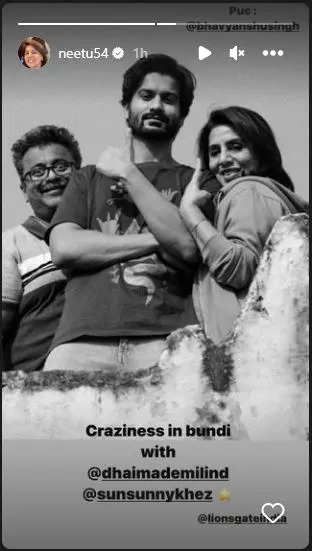 In the picture, Neetu could be seen posing with her co-star Sunny Kaushal and the director Milind Dhaimade.

Directed by Milind Dhaimade, the film is touted as a “coming-of-age story” which will capture the beautiful and relatable relationship between a mother and her son. It is being made under Lionsgate India Studios.

Using comedy as its main premise, the film delves into the integral fabric of families, communication, and memories, as well as their role in forcing us to grow up.

Neetu’s son Ranbir Kapoor and his wife Alia Bhatt recently welcomed their first child, a baby girl and the veteran star is currently celebrating the arrival of the new member of their family.

Neetu was last seen in the film ‘Jug Jugg Jeeyo’ alongside Varun Dhawan, Anil Kapoor and Kiara Advand the film received positive responses from the audience.

Sunny, on the other hand, was recently seen in a survival thriller film ‘Mili’ which got decent responses from the audience.

He will be next seen in another thriller film ‘Chor Nikal Ke Bhaga’ alongside Yami Gautam. The film will stream exclusively on Netflix.